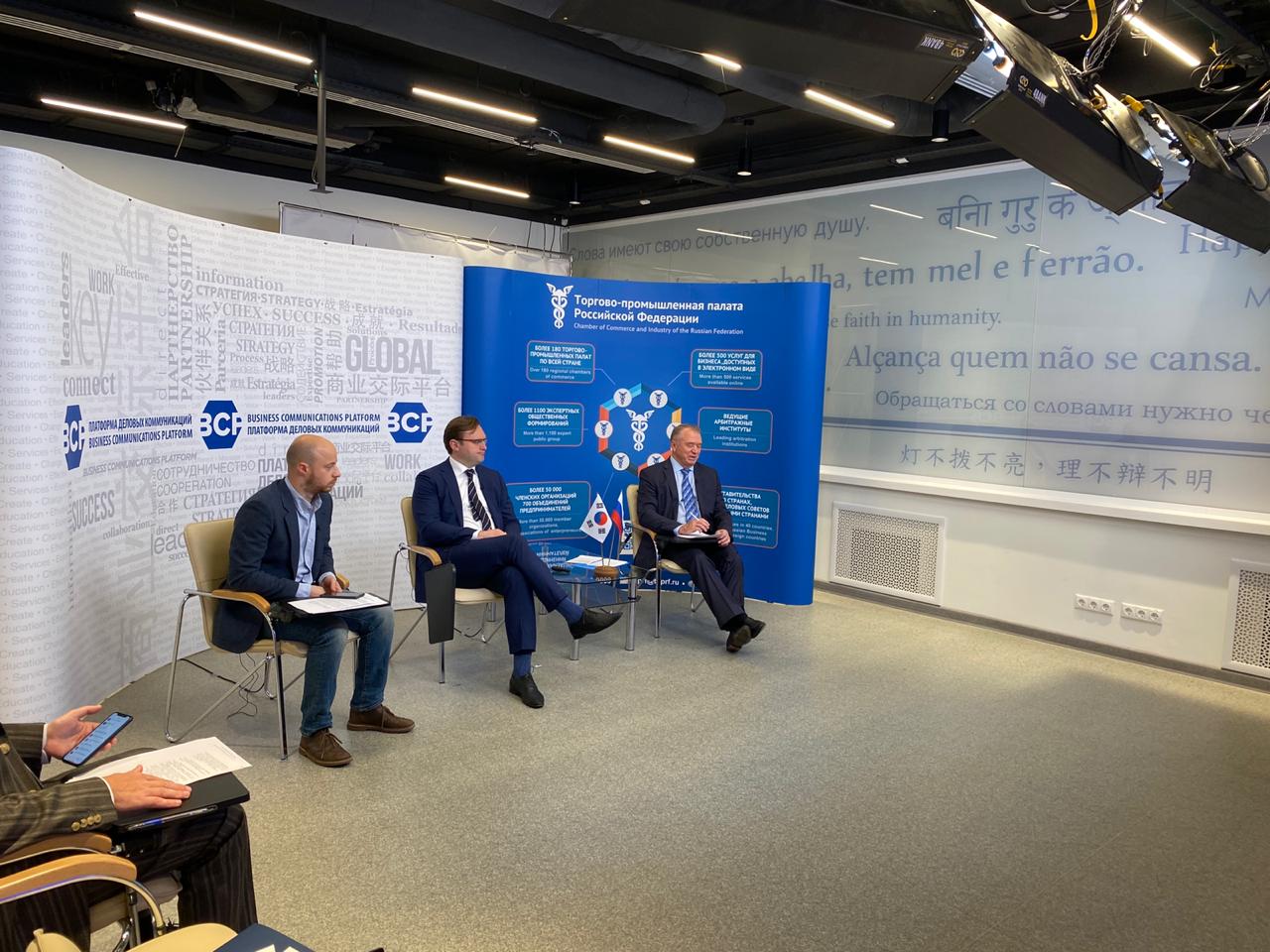 On the 22nd September 2020, the traditional event within the Eastern Economic Forum - the interstate business dialogue "Russia - Republic of Korea" - was held in the videoconference format. Representatives from Ministry of Industry & Trade of Russia and the Republic of Korea, Chamber of Commerce and Industry of Russia, Korean International Trade Association (KITA), as well as from leading enterprises of both countries discussed joint projects in the year of the coronavirus pandemic and collaboration prospects in various areas. The event was organized by the Roscongress Foundation, the Chamber of Commerce and Industry of Russia, the Korea-Russia Business Council (KRBC), and the KITA.

A two-hour-long discussion on “The Next Steps for Successful Bilateral Cooperation" was dedicated to the 30th anniversary of Russia and South Korea diplomatic relations establishment celebrated in 2020.

The session was attended by:

Kim Young-joo - the Chairman of KITA,

Sergey Katyrin - the President of the Chamber of Commerce and Industry of Russia (RF CCI),

Alexander Morozov - the Deputy Minister of Industry and Trade of Russia,

Park Kin-kyu - the Vice Minister of Trade, Industry and Energy (MOTIE) of the Republic of Korea,

and leaders of the Russian and South Korean business communities.

“This year we are celebrating the 30th anniversary of the establishment of diplomatic relations between Russia and the Republic of Korea. Our countries have achieved a lot, and today Russia is South Korea's tenth trade partner. Economic cooperation is becoming closer thanks to the integration of our countries’ policies: we are expanding opportunities in manufacturing and energy industries, infrastructure, IT and biotechnology areas. Russia is a technological power that has changed the consciousness of mankind, and the Republic of Korea holds high competitive advantage in the field of information and communication technologies, evidence to this is our success in the fight against the COVID-19”, - the Korean International Trade Association Chairman Kim Young-joo stated.

He said that, the Business Dialogue online format is a vivid example of the fact that COVID-19 has changed everyday life and the world order, while making it possible to search for "the right solutions."

The president of the Russian Chamber of Commerce and Industry Sergei Katyrin greeted the participants of the Business Dialogue. He noted that the Republic of Korea is Russia’s important partner not only in the Asia-Pacific region, but in the world as a whole. In 2019, South Korea ranked eighth on the list of Russia's main foreign trade partners. The countries are working under 50 agreement framework within the trade, investment and cultural areas and have taken significant steps to strengthen and diversify bilateral relations. “The anniversary of the establishment of diplomatic relations is a good reason to assess the work level and outline the future plans,” - the head of the RF CCI has said.

According to Mr Katyrin, the pandemic had a negative impact on the economies of all the world countries - Russia and the Republic of Korea were no exception. In 6 months of 2020, the Russian foreign trade value volume decreased by almost 17.5% compared to the same period in 2019. Trade turnover between Russia and South Korea dropped by almost 27% from January to June 2020. “We see a massive development potential in trade and economic collaboration. Today there are over 150 large companies from South Korea represented on the Russian market today, that are all interested in business. Russia also has a lot to offer. Today we’ll focus on topics that can form the diversifying cooperation basis, such as biomedicine, digital technologies, industries” - Sergey Katyrin has informed.

Deputy Minister of Industry and Trade of Russia Alexander Morozov focused on improving the quality of trade and economic ties through the mechanism for implementing long-term projects, primarily within the framework of industrial cooperation. Such projects already exist, for example, in the automotive industry, in shipbuilding and in the radio-electronic industry.

“The cooperation in the pharmaceutical area is currently relevant - we see good prospects in the production of a coronavirus vaccine. The Russian Direct Investment Fund and Korean partners are discussing the possibility of producing the Sputnik vaccine; we are holding a close dialogue. We expect to resume full-fledged interaction with the Korean partners in the nearest future. There are prerequisites - a few days ago it became known about resuming of passenger air traffic between Russia and South Korea. We consider it as an important signal to intensify the Russian-Korean dialogue in all areas!” - Alexander Morozov has noted.

His South Korean counterpart, Park Kin-kyu, the Vice Minister of Trade, Industry and Energy of the Republic of Korea called the Business Dialogue "a great opportunity to see the outcome”. He recalled the cooperation of countries in the automotive industry, shipbuilding and energy industry. In 2010 the Hyundai Motor Company has established the production of passenger cars in Russia, the countries are conducting joint science research projects. “The importance of contactless industries is growing in the world, and South Korea is a confident leader in ICT, healthcare, and semiconductor manufacturing. If we’ll manage to join our efforts, we will increase the level of cooperation between our countries and will achieve results in new fields. If over the past 30 years we have deepened our understanding, then in the next 30 years we are to build a new cooperation platform on a foundation of trust. I wish us find the right values!” - Park Kin-kyu has said.

Alexey Rakhmanov, CEO of the “United Shipbuilding Corporation”, noted that the pandemic had a direct impact on both shipbuilding and the cruise industry. The enterprises within the corporation felt production restrictions: some employees were transferred to remote positions, the entry of foreigners and the supply of foreign equipment were prohibited. At the same time, the industry has managed the pandemic challenges and resumed the previous work pace, the speaker said. “Today we are sending the nuclear-powered icebreaker “Arktika” from the Baltic Shipyard to the seaport of Murmansk. The development of the Northern Sea Route opens up new opportunities before us. The logistic benefits of sea shipping are obvious, and we are literally building the future with our Korean partners. A cross-cutting topic of our cooperation is localisation. The rules of the game have been set for years to come, their main principle is the gradual expansion of high-tech equipment share that should be produced in Russia,” - Rakhmanov noted. According to him, Russia is ready to develop a "digital wharf" and 3D-modeling software.

The head of the European Department of Hyundai Motors Ryu Jae Wang spoke about the work of the corporation in Russia. “Our factory plant operates in St. Petersburg with 230,000 units per year production capacity. The plant employs over 2300 workers, and we have 11 partner companies in the Russian market that produce components. In recent years, the company has created over 8,000 jobs in Russia. We became the first foreign automobile company to launch a full production cycle in Russia - from a workshop to an assembly line. This is an example for the introduction of foreign direct investment in the Russian economy,” - he stated. September 2020 marked the 10th anniversary of the opening of the “Hyundai Motor Manufacturing Rus” plant in St. Petersburg.

The experts discussed new opportunities for business cooperation between Russia and the Republic of Korea. Anton Shingarev, the Director of Corporate Relations at Yandex, spoke about cooperation with LG and Samsung in the production of speakers with a voice assistant, about the cloud technology development, and the creation of an autonomous car. Today Yandex already has around 20 4th generation cars based on the Hyundai Sonata platform: several cars are as taxis in the Innopolis, the rest run around Moscow.

“We didn’t just put our equipment in the cars, but integrated deeply - we had engineers from South Korea fly in and we integrated the platform and optimised the control algorithm at the hardware level. We managed to complete the integration stage prior to the coronavirus and were able to bring the car out onto the roads,” - said A. Shingarev.

Byun Hyong-Gyoun, the vice president of the Korean Telecom Corporation and Ahn Jae-yong, the CEO of the SKBioscience also performed at the conference, they presented prospective research within ICT and biomedical fields. Oleg Pak, Vice-Rector for Medicine at the Far Eastern Federal University, spoke about cooperation with Korean universities.

Vladimir Primak, the Director of the Russian Direct Investment Fund, noted that in recent years the fund has been actively investing in healthcare. Among the latest projects are investments in an innovative PCR-test system, that determines the presence or absence of a coronavirus in a person with a probability of 99.9% within 20 just minutes and investments in the anti-COVID-19 “Alfavir” generic drug. The Foundation’s main project today is the world's first registered coronavirus vaccine Sputnik V, produced by the Gamaleya Research Institute, that guarantees a long-term immune response.

“Today, the third phase of the trial is under way, that 44,000 people take part in. The vaccine was developed by our partner - the Gamaleya Institute, and it is the result of many years of work. We plan to complete the preliminary trials for the safety and efficacy of the vaccine by November and release to the Russian and international markets. The vaccine is safe: it does not contain an adenovirus, but contains a vector - the RNA of a virus, which is not able to reproduce and cause damage, but it carries genetic information and enables the body to produce antibodies. We want to cooperate with the Republic of Korea not so much in sales, but rather in the production of the Russian vaccine. The demand is for hundreds of millions of doses.” - Vladimir Primak has noted.

President of the Russian Chamber of Commerce and Industry Sergey Katyrin thanked the videoconference participants for their support and cooperation in prospective directions.

“I hope that in the near future we will be able to work on common topics in person. I would like to meet all of you next year in Vladivostok at the Eastern Economic Forum, shake your hand and hold an offline discussion on joint work. I sincerely thank the Chairman of KITA, colleagues from the Russian-Korean Business Council and the Roscongress Foundation, who helped in organising the Business Dialogue process. We really look forward to meeting you in Vladivostok!” - Sergey Katyrin stated.

The recording of the broadcast is available on the Roscongress Foundation electronic resources.